Midnight Eye asked its writers to contribute to their annual top ten survey. The article is due to be published in the next week or so, but here is a sneak preview of my list. As I am not living in Japan anymore, (nor a major metropolis) I have not yet seen enough of the past year's feature films to make an informed judgement on the top features of 2008. I have, however, been immersed in animated shorts, both new and old, these past months. As a result, I made up a top ten list of the best animated shorts of the past year. Some of these films have a 2007 release date, as it can take a year (or more) for short animated or experimental films to wend their way around the world on the international animation festival and art gallery circuit.

Koji Yamamura’s Kafuka Inaka Isha tops this list because of its technical brilliance – it was a big hit at all the festivals it entered (which was pretty much all of them). This year saw young animators like Kunio Katō and Yasuhiro Yoshiura reach a level of maturity in their work. Katō was rewarded with prizes at and and Yoshiura’s Time of Eve series (the least ‘experimental’ on my list but very innovative nonetheless) has attained a popular following on the internet. Seasoned animators like Keiichi Tanaami, Nobuhiro Aihara, Mika Seika and Atsushi Wada all produced fantastic new work, while Tomoyasu Murata wins the prize for being the most prolific animation artist of the year. Exciting newcomers on the scene this past year include the surreal work of puppet animation artist Yūsuke Sakamoto and Daisuke Hagiwara with his timely computer animation about money and globalization. Hiroyuki Mizumoto gets my diamond in the rough award. He is still struggling with the balance between artistry and message, but his willingness to take risks as a young artist deserves recognition.

Omukai-san (Face to Face, dir: Mika Seike)
A feminist interpretation of a dialogue between a man and a woman done in her signature visual style (animation of scanned objects and photographs).

Tsumiki no ie (La maison en petits cubes, dir: Kunio Katō)
A beautifully rendered cel animation about an elderly man who dives down into his flooded home and encounters memories from his family’s past there.

Eve no Jikan (Time of Eve, dir: Yasuhiro Yoshiura)
A new take on a favourite theme for manga and anime artists: humanity’s ambiguous relationship with robots in the future. Yoshiura explored these themes in his earlier shorts Mizu no Kotoba and Pale Cocoon. Now he has taken his ideas and artistry to a new level of maturity in the first three episodes (more coming soon) of a six-episode series being released internationally on Crunchyroll.

Remon no Michi () and the Kazoku Dekki series (dir: Tomoyasu Murata)
Murata has been very busy this past year with more than half a dozen new short animated films (puppet and cel animation) and some major exhibitions of his art in the area. Lemon Road continues his introspective My Road series, and he has completed 6 shorts about the Dekki Family. 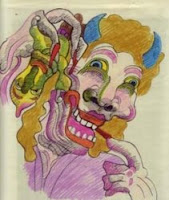 Issun Boushi (Inch-High Samurai, dir: Keiichi Tanaami and Nobuhiro Aihara)
A new interpretation of the traditional Japanese tales of the One-Inch Samurai. Tanaami and Aihara approach the tales with their characteristically dark senses of humour.

Tanpopo no Ane (The Dandelion Sister, dir: Yūsuke Sakamoto)
A surreal little tale of a young girl who has a complicated relationship with her elder sister who is an ailing dandelion. The attention to detail in this film is remarkable with the imagery clearly inspired by the work of Vincent van Gogh.

The Kinrakuen (dir: Daisuke Hagiwara)
A timely computer animation about money and globalization.

Maiagaru Shio (Salt , dir: Hiroyuki Mizumoto)
An unusual little film about our relationship to the environment. A bit rough around the edges, but Mizumoto shows promise as an experimental animator
.
Special Mention (best and most hilarious non-animation, experimental short):

Jūnanako no Kūkan to Ippiki no Ujimushi de Kōsei Sareta Sakuhin (A Story Constructed of 17 Pieces of Space and 1 Maggot, dir: Isamu Hirabayashi)
An amusing exploration of what it means to be an artist and a human being. The witty voice-over narration leads us through the main protagonist’s transformation into a maggot who has retained his human consciousness from his former life. Beautifully shot and cleverly written, this film was a pleasure to watch from start to finish.