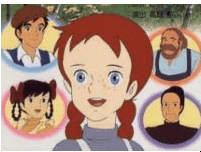 I started watching 赤毛のアン (Akage no An: literally “Red-Haired Anne”) this week partly out of my ongoing curiosity about the Japanese fascination with Anne. I have been a fan of Lucy Maud Montgomery

novels ever since I first learned how to read and have a collection of all her writing (I haven’t been able to get a hold of all of her published journals yet though) in storage in Canada so I can certainly understand the universal appeal of the character of Anne. People all over the world have fallen in love with this spunky orphan girl who is adopted by an elderly pair of siblings.

My first encounter with this 1979 anime was on German television where it had been dubbed into German. Yet no other country in the world has taken their love for Anne to the level that the Japanese have. Growing up in Canada, I had heard about the hoards of Japanese tourists that flock to Prince Edward Island every year to visit Green Gables in Cavendish. I myself took the same pilgrimage with my family when I was a girl. The extent of the obsession in Japan impressed itself upon me in 2001 when I was on a driving tour of Hokkaido with my husband and his parents. As we headed through the countryside towards the town of Ashibetsu we were startled by a large Pizza-Hut-style sign with an arrow pointing left that read ‘Canadian World’. Unable to resist, we followed the arrows until we found the theme park which had been abandoned in 1998 due to lack of profits. The park gates were open and the buildings were all still there so we could take a look around and get an idea what it had been like during its ‘glory days’. Some locals had set up stalls nearby where they were trying to sell their wares to any unwary tourists like us who had happened upon the site. Apparently the Anne-inspired theme park had opened in 1990 with the idea of bringing jobs and tourist dollars into Ashibetsu. According to an interesting article by Yuka Kajihara on the Anne phenomenon in Japan, they even imported Canadian staff to teach skills such as log-house construction and quilting and, of course, even had a ‘red-haired Anne’ brought in from P.E.I. to delight the tourists. It was not particularly surprising that the venture should have failed. Big-spending tourists from the main island of Honshu would have had to be flown in to Hokkaido then bussed in. Sure, it would have been closer than flying all the way to P.E.I., but their miniature Avonlea was pretty tacky and lacked the simple beauty of small-town P.E.I. I wondered if the cartoonishness of these overly-painted models came from the manga and anime versions of Anne in Japanese culture.

This Nippon Animation series also interests me because of its director Isao Takahata (高畑勲). Takahata is the director of the most powerful anti-war film I have ever seen, Grave of the Fireflies

(火垂るの墓、1988). He was also Hayao Miyazaki’s creative partner in the creation of Studio Ghibli. Miyazaki (宮崎 駿) worked on layout designs for Akage no An for the first 15 episodes of the series before leaving Nippon Animation altogether. Another major creative force on this series is the animation director Yoshifumi Kondo （近藤喜文）, who also moved to Studio Ghibli and worked on some of their greatest films including his directorial debut Whisper of the Heart

(耳をすませば,, 1995), but whose career was cut short by his untimely death in 1998. These three animators are all known for their sympathetic portrayal of strong shojo protagonists, so it is not surprising that they were all involved in the adaptation of Anne of Green Gables to an animated television series.

The animation series runs for 50 episodes, which means more than one episode for each of the 38 chapters in the original novel. They skip the title for the first chapter “Mrs. Rachel Lynde is Surprised” and use the title of the second chapter “Matthew Cuthbert is Surprised” for the first episode, though we do get to see Mrs. Lynde receiving her big surprise quite early on in the episode. The opening credit sequence demonstrates one of the reasons Anne is such a hit in Japan: they share Lucy Maud Montgomery’s romanticisation of nature. As the opening credits roll, Ann flies a horse drawn buggy through a dream sequence of the apple blossoms of the White Way of Delight which transforms into autumn leaves and then into a snowy scene, emphasizing the Japanese love of seasonal imagery. Sonja Arntzen has argued convincingly that part of the reason Anne became such a big hit when it was first published in English in 1951 was due to this tradition of seasonal imagery in Japanese literature. I am pretty sure many Japanese readers have delighted in Anne’s naming of the cherry tree at Green Gables the Snow Queen.


I found the realistic style of Akage no an quite refreshing as most of the fare on TV these days is so stylized. They haven’t made Anne into a round-faced cherub, but have kept her awkward skinniness. She is, after all, coming to the Island from a life of deprivation. I would not be surprised if by the end of the series she has, like she did in the book, become more soft and rounded in appearance. I can only hope that they don’t make her as fat as Mrs. Lynde (who I believe is depicted as bit chubby in the novels), Matthew, and even Marilla (though the latter not as much so). Matthew’s huge moustache is a bit comical – I don’t think it would have been proper to have such a very shaggy moustache in those days on the Island. I’m not convinced by Anne having blue eyes either – weren’t they green or hazel? I must dig up the dog-eared copy of the novel that is with me here in Japan and check some of the finer points. In terms of character and costume, however, everything seems to be spot-on. They must have done quite a lot of research in order to render the locations which such accuracy. The only real jarring point for me so far is the male narrator. Now I know that Japan has a tradition of benshi narration, but as the novel was so well known in Japan by the 1970s (it was even on school reading lists!), I don’t think that the narration was necessary. To be true to the novels, it would have suited much more to have a female voice as a narrator. LMM’s voice as narrator is present in all her novels adding humour and wit to her stories. As the story has been transferred to a visual medium, they should have dispensed with the narrator’s voice altogether though. Will have to check out more episodes to see if it continues in the same way throughout the series. 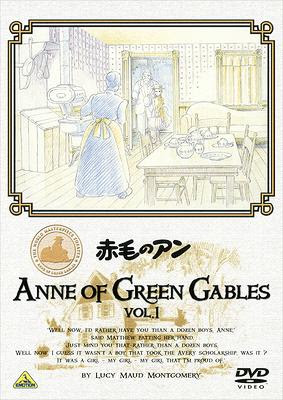