My Neighbours the Yamadas (ホーホケキョとなりの山田くん, 1999) 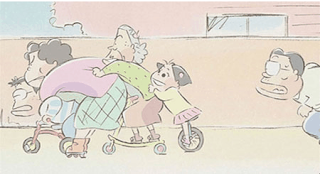 Joyful laughter
breaks the silence
of an autumn eve
– Bashō
It is a rare film that interweaves classical poetry with tales of modern life, but Isao Takahata (高畑 勲, b. 1935) manages it successfully in his 1999 feature length animation My Neighbours the Yamadas (ホーホケキョとなりの山田くん / Hōhokekyo Tonari no Yamada-kun). The haiku poems that punctuate the narrative vignettes work surprisingly well on a number of levels. The poets featured – Bashō (1644-1699), Buson (1716-1783), and Santōka (1882-1940) – represent very different epochs in Japanese culture and the film demonstrates the timelessness of this minimalistic verse form. Usually adding a flourish to the end of a scene, the haiku reminds us of the constancy of life’s little poetic ironies. The world, in all its splendor and glory, has both delighted and disappointed human beings throughout the ages. The minimalism of haiku also complements the spareness of Takahata’s animation.


My Neighbours the Yamadas is an adaptation of a yonkoma manga of the same name by Hisaishi Ishii (いしい ひさいち, b.1951) about a family of five: the easy-going young daughter Nonoko (aka Nono-chan), her older brother Noboru, her absent-minded homemaker mother Matsuko, her salaryman father Takashi, and her cranky maternal grandmother Shige. The family also has a pet dog Pochi, who has a somewhat sullen temperament. Young Nonoko was so popular as a character that the manga eventually changed its name to Nono-chan. It ran regularly in the Asahi Shimbun between 1991 and 1997. 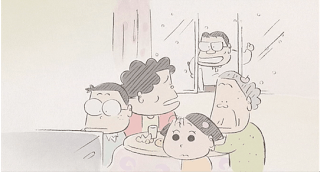 In a nod to the manga, which is mainly told through the eyes of the daughter, Takahata’s film adaptation begins with Nonoko as the narrator introducing us to her family life. As the film progresses, all members of the family are given equal time and the narrator is replace by title cards introducing new themes or occasionally a male narrator reading aloud the interspersed haiku.


Although My Neighbours the Yamadas was critically acclaimed upon its release (it won an Excellence Award at the 1999 Japan Media Arts Festival), it was not a big box office success like most Studio Ghibli productions. There are likely several reasons for this. It is not a showy production visually like its Ghibli predecessor Princess Mononoke (Mononoke-hime, Hayao Miyazaki, 1997). Although the film does feature children, its situational humour is likely more appreciated by an older audience - not the young women (& men too, but women make up the bulk of the cinema-going audiences in Japan) who would pack the theatres for a heroine driven spectacular like Spirited Away (Sen to Chihiro no Kamikakushi, 2001)


The story is also not plot driven, like Takahata’s previous film Pom Poko (Heisei Tanuki Gassen Pom Poko, 1994)). Instead, the film mimics the episodic nature of the yonkoma manga: a four panel layout that follows a kishōtenketsu (introduction/development/twist/resolution) plot structure. Nausicaa.net has an amusing example of a Nono-chan yonkoma from July 21, 2007 with translation which you can read here. Like the haiku, the art of the yonkoma is in its simplicity. It is not a long, and rambling manga series, rather, each episode has whittled down a typical family scene to its essence. 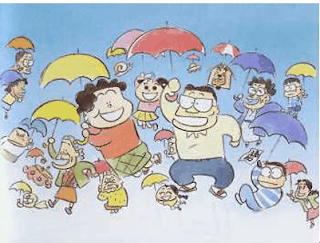 I can see the average cinema-going audience, lulled into certain expectations by traditional flashy anime fare, become restless halfway into the film by the lack of a driving Aristotelian narrative. The plot does not build and build to a climax like say a Disney film would. Instead, it is a series of episodes with each indivisual episode following the Asian kishōtenketsu development structure. There is a kind of a climax at the end of the film with a colourful dream sequence to the strains of Matsuko and Takashi singing a karaoke version of Que Sera Sera, but this is less of a plot climax and more like the grand finale of a Hollywood musical. In fact, this scene gives a nod to two Hollywood legends: Doris Day in the choice of song (Que Sera Sera) and Gene Kelly's infamous dance sequence in Singing in the Rain for creative use of umbrellas (see photo above this paragraph). 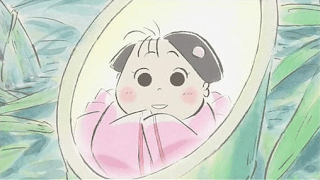 For the patient spectator, My Neighbours the Yamadas is a true cinematic delight. I found myself laughing several times during each vignette. Some of the stories are very Japanese: such as the references to Japanese fairy tales (see photo above paragraph for Taketori Monogatari reference) and a sequence dedicated to an old wives tale about ginger in miso soup making people sleepy.

Digression: I was surprised to learn that an English dubbed version was made in that States because I can’t imagine how they would translate some very Japanese situations. The German subtitled version I was watching made some rather strange translation choices, such as translating nabe as fondue. I think Eintopf would have made more sense if they really felt viewers would be perplexed by Japanese names for dishes. (German readers, what are your feelings on this?) Translators should never underestimate the intelligence of their viewers. With the popularity of Japanese restaurants throughout Germany (if not most cities in Europe), using the Japanese names for dishes would actually be more informative for viewers. They could always put the definition in a pop-up extra on the DVD. . . or somewhere else on the screen as enterprising fansubbers do quite successfully. (End of Digression)


Watching a Takahata film is a bit like watching an Ozu film for me. Although there are many elements that seem inextricably Japanese, the story and characters have a universal appeal to them. We can all identify with the family bickering that arises between parents and children, husbands and wives, and siblings. The themes of laziness, forgetfulness, generational divides, the frustrations of sharing a family home, the pressures of life’s expectations all hit home for me as well. This film is a particularly good to watch post-Christmas / New Year’s holidays as an an
tidote to any unwelcome family squabbles.