Kashiko Kawakita at the NFC 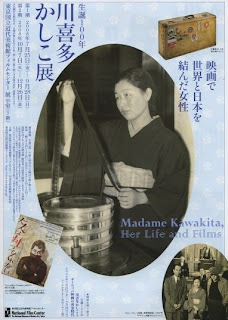 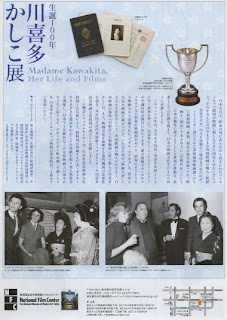 This year marks the centenary of the birth of Kashiko Kawakita (川喜多かしこ, 1908-1993). Kawakita and her husband, Nagamasa Kawakita (川喜多長政, 1903-1981), dedicated their lives to the promotion of Japanese films overseas and foreign films in Japan. Her achievements include sitting on the Cannes Film Festival jury in 1963, founding the Kawakita Film Institute (formerly the Japan Film Library Council) in 1960, as well as contributing to the establishment of the National Film Centre (NFC). She was recognised for her contributions to Japanese Cinema with a special award at the Mainichi Film Concours in 1993.

With the assistance of the Kawakita Film Institute, the NFC is hosting an exhibition of artifacts related to the life of this respected 'film ambassador' known as Madame Kawakita. The exhibition is accompanied by a sereies of screenings entitled Madame Kawakita: L'Ambassadrice cinématographique du film européen (生誕１００年川喜多かしこ展). The screenings include Le Million, Alexander Nevsky, Du haut en bas, Les sept péchés capitaux, Le Doulos, Repulsion, Il Desert Rosso, among many other classics of European cinema all on 35mm.

The exhibition runs until December 12th and the screening series runs until September 28th.
Posted by Cathy Munroe Hotes at 3:45 pm